Tom has played the pipes for much of his adult life, after growing up playing classical music. His enigmatic approach to Irish piping features the interplay of harmonic relationships -with some reinterpretation of the instrument itself- that embraces an array of traditions: from medieval chant to classical impressionism to American military marching band and beyond. He has performed in concert, taught workshops, or provided demonstrations at the Na Píobairí Uilleann Annual Tionól (Dublin) the Southern California Tionól, the Seattle Tionól, the St. Louis Tionól, and the Willie Clancy Summer School (Co. Clare, Ireland). He has recorded and/or performed with Laura MacKenzie, Dean Magraw, Daithi Sproule, Dan "Daddy Squeeze" Newton, story teller Kevin Kling, Metropolitan Symphony Orchestra, St. Olaf Orchestra, Twin Cities Women's Choir, and The Actors Theatre of Minnesota. Tom is the uilleann piper in The McNordiques, a Celtic-French-Nordic trio featuring Dan Newton and Renee Vaughan. He is a member of the Great Northern Irish Pipers’ Club (GNIPC), a non-profit organization devoted to fostering uilleann piping in America's Deep North. He teaches uilleann piping at the Center for Irish Music.

"Daddy Squeeze" has been playing offbeat accordion music since 1987, when he won the Nebraska State Accordion Contest at the Czech Festival in Wilber, Nebraska. He has used the squeeze box for playing all kinds of music not normally associated with free-reed instruments, as well as standard accordion material.

Daddy Squeeze also enjoys mixing up styles and genres that don't generally seem compatible. "Music out of context", or "Ethno-clectic Bop" is the result of his genre-bending experiments with Celtic, Tex-Mex, Creole, Blues, Jazz, Scandinavian, Polka and pop music.

Dan's fresh approach to the much-maligned squeeze-box and his mind-boggling repertoire of both original and traditional material will change the mind of the most hardened accordion skeptic, and delight the fan of the instrument. He draws influences for songs and tunes from such sources as French Musette, Gypsy Swing, Cajun, Jug band, Tex-Mex and Cumbia. Dan calls this global gumbo "ethnoclectic" music. "Daddy Squeeze" happily crosses musical borders with ease, often mixing styles with results like the "Yohnny B Goode Polka" (a hilarious look at what Chuck Berry's music might sound like had he grown up in Minnesota)or a French language waltz version of the rock and roll chestnut "Wild Thing". Dan's original songs about thrift store shopping, coffee, hi-top sneakers, heartbreak, and joy are delivered with a voice that is captivating, expressive and encourages harmonizing. He mines gems from the repertoires of icons such as Gus Viseur, Gus Cannon, Bo Carter, Jo Privat, Clifton Chenier, Bob Wills as well as a few nuggets written by his friends and fellow musicians of today.

Dan "Daddy Squeeze" Newton entertains and enlightens his audiences with stories and colorful anecdotes about the accordion's history and his experiences making a living by playing and singing with the instrument he loves. Accordion lovers walk away from Dan's shows knowing they've heard their favorite instrument presented in a fresh and new way, while the squeezebox skeptic will realize that there is much to love about the accordion when it's in the right hands.

Renee Vaughan plays traditional Scandinavian music on the nyckelharpa, an instrument that has been around in one form or another for over 700 years. The sound is both rustic and ethereal. She enjoys high energy slängpolska and minor key schottis. Renee has played for the King and Queen of Sweden, but her most consistent and attentive audience is her dog, Goosey.

Renee performs throughout the northern heartland area with many different musical constellations, and is a regular at the American Swedish Institute, Høstfest and Nisswa-Stämmän Scandinavian music festivals.

"I’m a bit of a musical late bloomer. About ten years ago, I learned traditional Swedish folk painting from Judy Kjenstad. To help with inspiration, I borrowed a CD of Swedish folk music from the local library, and kept it on repeat for days. One tune in particular was an instant favorite, Eric Sahlström's“ Pinntorpafrunpolska,” on nyckelharpa. When I mentioned this to Judy, she said she plays nyckelharpa and would help me get started. Within a few months she secured a Sören Åhker harpa and generously taught me." 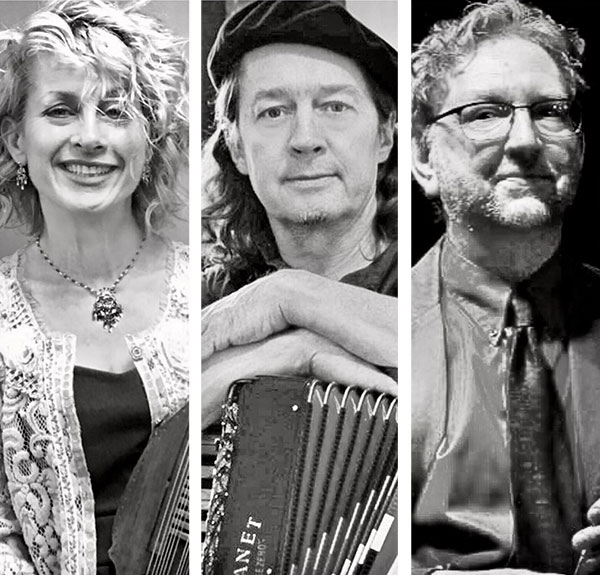